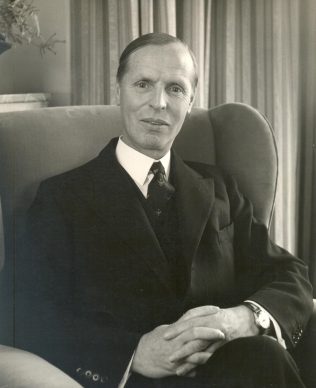 OB Miller graduated from Jesus College, Oxford with a First in History.  He was presented with the Stanhope Prize for history for his work on Robert Owen and early trade unionism.

He was interviewed by John Spedan Lewis and joined the Partnership, on 12 September 1927, as a graduate learner.  His first assignment was in the silk department at John Lewis Oxford Street.  He described the next five years as a “a very confused period in my mind, in which I moved from job to job”.

As personal assistant to the Spedan Lewis, Miller witnessed, first hand, the Parntership’s move from private to public company, its expansion into branch trading and worked on the Partnership’s first constitution.

He served the Partnership as Financial Adviser and three terms as General Inspector.  In 1950 he was named as successor to the first Chairman, Spedan Lewis, becoming First Vice Chairman then Deputy Chairman and finally Chairman in 1955 on the retirement of John Spedan Lewis.

Throughout his life he held many public appointments, including the following

He was knighted in 1967 and retired to Leckford in 1972, but continued his Partnership involvement as Chairman of Leckford Estate until 1977.