This article, written by the John Lewis Partnership Sailing Club’s first Commodore, is at the front of the Club’s 1951 Year Book (which can be seen at Heritage Services, Odney)

“In The Beginning”. By T.G.M.(Geoffrey) Snagge

It is difficult to say exactly how the Sailing Club began.

The Chairman had mentioned several times since the war that he thought the Partnership would do well to have one, but it was not until I received a letter from him dated 20th December 1950, that the idea took definite shape.

After a discussion at Longstock a fortnight later, between the Chairman, his son Mr Edward Lewis and myself, the Chairman decided to go ahead with the idea, and asked me if I would undertake finding a suitable craft, and forming a Club. Ten minutes after I had refused I found myself doing it with enthusiasm, and so began an exciting and extremely interesting and pleasant six months. 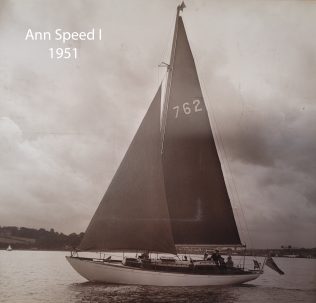 My terms of reference were as broad as anyone could wish for, and one had the comfortable feeling that the Chairman was always at hand, ready to give advice and help whenever difficulties arose, and awkward decisions had to be made, It is one thing to ask that a certain thing be done, but quite another to follow it up with advice and encouragement, and a constant readiness to discuss and decide difficult points whenever they crop up, and I do not think members of the Club will ever know what great personal pains the Chairman took over the formation of their Club, or how grateful they should be to him,

The first thing to do was to find out about how many Partners would support such a Club, and a notice was put in the Gazette asking for names. About a dozen replies were received, one of which read “I vaguely sense the direction of the wind, an

d after a considerable amount of thought usually guess the direction of the tide. I am often sick, I break things and hearts. I take up a lot of room, but I do not mind emptying the bilges and I do not mind peeling the potatoes”, He was immediately asked to serve on the Committee, and in this spirit the John Lewis Partnership’s Sailing Club came into being. 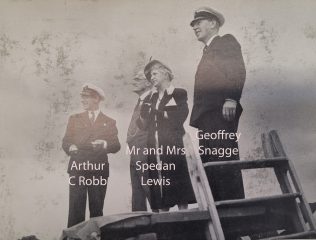 Several second hand boats were looked at, but none seemed to be exactly what we wanted and finally, with the Chairman’s consent, an order was placed with Messrs. W. H. Moody & Sons Limited to build  one of the Lion class yachts, designed by Arthur C.Robb.

The contract was signed on the 14th February 1951, and work was started at once, She was built under Lloyds and Designer’s supervision, and was classified as A.1,15 on completion – the highest classification possible – and was launched by Mrs Lewis, the Vice Chairman, on the 8th August 1951.

The building of “ANN SPEED” and all the excitements and tribulations that it involved is a story in itself, and can not be condensed into a short article, but from start to finish there were no serious disputes or difficulties, and when things went wrong they were everybody’s concern.

She was built during the worst months of inflating prices, and it was inevitable that I had to go back to the Chairman for a supplementary warrant. It is perhaps indicative of the spirit in which she was built that this was sent by return of post with payment  with the following comment. “I am no geographer and uncertain whether the road from Jerusalem to Jericho runs for some distance along the Sea of Galilee. However that may be, I suspect it to be the haunt of sailors”,

The reference to the “road from Jerusalem to Jericho” presumably refers to the Parable of the Good Samaritan where a traveller (implicitly understood to be Jewish) was travelling along that road and was attacked by robbers.

The parable then goes on to describe the action of the Good Samaritan (and Samaritans and Jews despised each other) who stopped, unlike others, to help the poor man.

That Spedan Lewis could poke fun in this way at Geoffrey Snagge is surely a measure of the regard he held for him.

Comments about this page