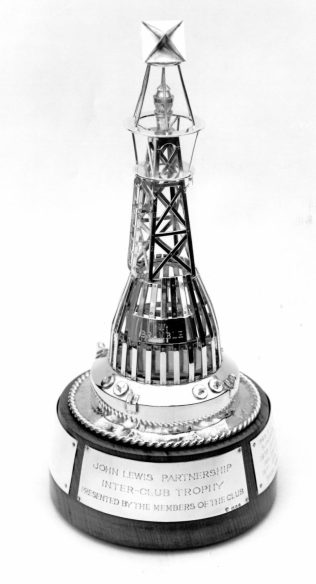 We invite others to join us such as clubs (RAF, Bank of England, BBC and others) and individuals (linked to us in business), indeed initially various banks set up their own sailing clubs around the time we did and it was those who joined us. They still continue with their series (latterly known as the Banks Series) of which our race was the last and from the early 50’s racing has been an annual event.

We award trophies for our event and in recent years three have fought over by the contestants:

Back in the 60’s one trophy was called the Red Wing Trophy and in 1969 the club “decided that the time has come to give a more suitable trophy”. It was called the West Bramble Buoy and the £130 cost of this silver trophy was raised by members of our club. Collections were organised in each sailing branch and it was suggested that Skippers might like to donate £1 and mates 10 shillings. You will be glad to hear a note went out as a reminder to “take care that no undue pressure upon Partners to contribute”.

We no longer award this trophy as it is now rather more valuable than £130 so is kept safely in our hands rather than other club’s trophy cabinets!

Found in the Gazette dated 21 June 1969 and other memos