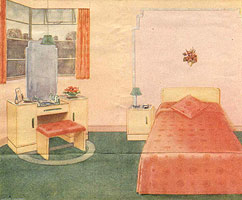 During World War II, people had more serious things to worry about than furniture or decoration. Interior decoration in the home remained in the often quite dull greens and browns of the 1930s.

During wartime and post-war rationing, designers tried to create practical, affordable furniture. Britain’s Board of Trade brought in the Utility Furniture Scheme in 1941. The scheme rationed how much was produced and limited available styles. Only those with a genuine need – for example newly-weds setting up home or families whose homes had been bombed – were allowed to buy it. Fabrics came in sensible colours that wouldn’t show the dirt, while

dining chairs were low-backed to save wood. 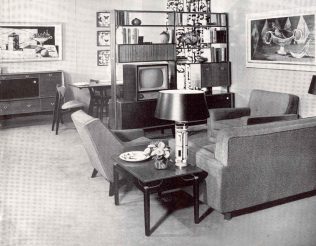 By the 1950s, interest in interiors returned. New trends in furniture design and decoration for the home were inspired by art. Bright and exciting designs replaced gloomy florals. The work of painter Paul Klee created a fashion for patterns of coloured squares on sofas and chairs. The squiggly creations of Spanish painter Joan Miro were copied on carpets, curtains and ceramics. And the splish-splash style of Jackson Pollock’s paintings appeared on wallpapers and textiles.

Department stores like John Lewis began to import furniture from Scandinavia and Italy. The new enthusiasm for domestic design and technology was reflected by the success of the Festival Of Britain in 1951.

At last, ordinary people could buy stylish, well-designed furniture. The first plastic chair off the production line was Charles Eames’ Shell Chair in 1948. It was inexpensive, light and hard-wearing. And it came in bright, modern colours!