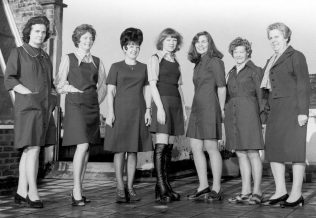 In the 19th century shopworkers wore a universal uniform of black dresses with high white collars for women and white, high collared shirts, black jackets and ties and striped trousers for men. In the grocery trade those dealing with provisions and fresh food wore full length white aprons with brown aprons for grocery goods.

In 1914 Peter Jones staff moved from black to navy business dress, followed by dark green in 1931. During the War restrictions were lifted and grey suits for men were acceptable until 1949 when new business dress rules were implemented for both sexes in department stores. In Waitrose there was little change until the 1960s with the advent of nylon overalls in grey and blue followed by light and dark brown for grocery departments and white for fresh foods whilst in the department stores the regulation dress changed several times from grey to sand and then to French navy in 1972.

New business dress, including trousers for women, came in in 2000 and from that time onwards the changes have been more regular whilst still ensuring Partners look the part.

Comments about this page