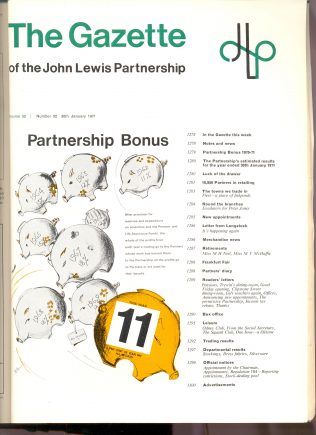 The publication of the very first Gazette, dated 16 March 1918, gave John Spedan Lewis (The Founder), the chance to tell his, “fellow employees of Peter Jones Ltd” something about his ideas. His discourse on industrial structures, capitalism and government led him to identify profit-sharing as the way forward and brought him to the conclusion that, “this policy is profoundly conservative though you may not think so: it is really in the long run the natural alternative to anarchy”.

The Founder’s open letter was not confined to theory. He made a promise to Peter Jones employees that would shape the character of the Partnership. “Once we are making profit enough to pay all our dividends and to provide proper reserve funds against a rainy day, all further profit will belong to the Staff”, he wrote, “and it will, therefore, be for the Staff to decide whether they will work a shorter day or week, down to whatever may prove to be enough to pay the dividends, or whether they will have extra money”.

The course of the new Partnership Benefit Scheme was not destined to run smoothly. The 1920s saw a national slump, profits disappeared and preference dividends for Peter Jones Limited remained unpaid. It was not until 1925 that profit-sharing was re-introduced, this time in the form of ‘Share Promises’ which were, as their name suggests, promises on the part of the Founder to provide preference shares in due course. In the meantime, Spedan Lewis undertook to pay a twice-yearly dividend of 7.5% himself.

During the Second World War, Partnership Benefit again remained undistributed, and the difficult years of the immediate post-war period during which stock certificates were only shared out for 1946-1947 and 1947-1948.

Writing in The Gazette on 28 January 1950, the Founder announced that earnings for that financial year “must be used, like those of 1948-1949, to strengthen our general position and so to diminish the risk of a general pay cut”. Even so, pay cuts were introduced in 1952 and Partnership Benefit, now referred to as ‘General Bonus’ was next distributed in 1954.

The first cash payments were made after the 1964-1965 trading year when the then Chairman Sir Bernard Miller announced that each Partner was to receive a Bonus of 8% in shares and 5% in cash. This, it was made clear, was to, “mark the special character of the year for us – the year of the Jubilee of the Partnership, the Centenary of John Lewis and the achievement of outstandingly good sales in many branches”.

Nevertheless, the die was cast, and in 1970 an all cash Bonus was paid for the first time. Profit-sharing in the Partnership had evolved into its present day form even without the stimulus of anarchy in the UK.