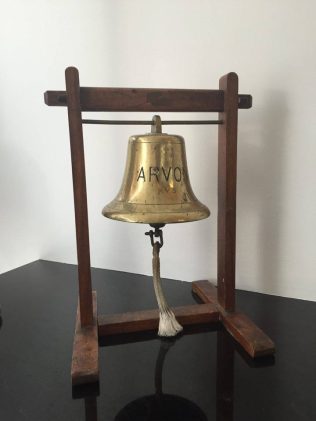 The History of the Arvon Bell

The ‘Arvon’ was T.G.M. Snagge’s old yacht. He presented the bell to the John Lewis Partnership Sailing Club when he was Commodore in the 1950’s. “It was always on the top table when the annual ‘Evening Dress’ dinner was held at Peter Jones”, John Draper, Admiral and archivist tells me. Furthermore Geoffrey Snagge, as he was known, not only gifted this bell but also donated his buoy on the Beaulieu River to the club and that buoy is used regularly by club members today.

Once various central functions moved from Oxford Street in the early 1990’s the Arvon Bell went to Odney at the suggestion of another Commodore, Robert Fraser, who was the Odney Manager.  In the most recent years to 2016 it sat on its stand on the bar in the Sir Bernard Miller Centre. It now resides in the JLP Heritage Center at Odney.

As to the question what was Arvon, I have done a little research and the yacht Arvon was built in 1884 by Stow and Son, boat builders in Shoreham by Sea. Lloyd’s Register of Yachts, published annually back then, reveals that she is a

The Arvon is still sailing and in 2014 was restored by its current owner, Detlef Staats, in Germany. The restoration won first prize in the 2013 Restoration Awards at the German Classic Yacht Club – http://www.fky.org/news/restaurierungspreis_2013.htm