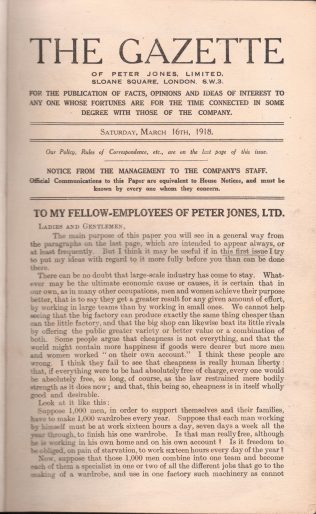 The first issue of the Gazette of Peter Jones Ltd was published on Saturday 16th March 1918, and was mainly written by John Spedan Lewis.

He begins by writing “To my Fellow Employees of Peter Jones Ltd.”

He goes on to write a lengthy commentary about the structure and organisation of British industry and business at that time.

He introduces his future plans, “The business will be run by the Staff, subject to scrupulous care of the capital and dividends just as a modern state, however democratic, has to be scrupulously careful to play the game with regard to its National Debt.

He invites people to write to the Gazette saying that “It must not admit contributions on one side of a public question, and exclude those on the other side.

He goes on to say “Honest criticism is good for all of us and the higher our position the more we are likely to lose for the lack of it.”

Spedan encouraged and welcomed contributions that were both signed and unsigned. He also lays out the intention that the publication will be used to inform Staff of the Company Rules.

On a lighter note, the Gazette includes some interesting recipes which reflect the food shortages of the time, with emphasis on puddings made with custard powder, and bulked out with potato and carrot before being sweetened with fruit.

Competitive contributions were requested, including a Half Guinea prize (55p), for a set of verses on the subject of “Green Ink”.