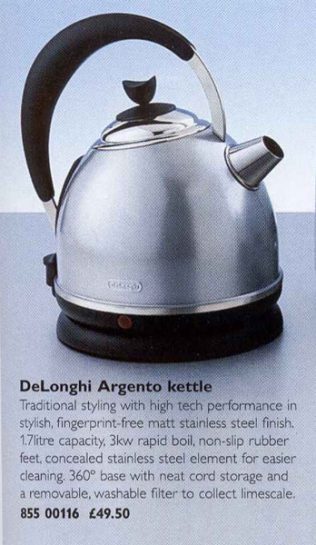 The classic K2 kettle design was launched by the manufacturer Russell Hobbs in 1959. It was part of the so-called ‘Forgettable’ range, so-called because the products had automatic cut-off switches. This meant the kettle switched itself off when the water had boiled. It also had a cool-touch handle and lid knob so you didn’t burn your hands.

100 years ago people heated their water over the fire. Then, when cookers became more widely available the whistling kettle became a well known kitchen gadget. When the water temperature rose to boiling point the steam pressure within the kettle was forced out through the lid giving a high pitched whistling noise, to tell everyone it was time to make tea.