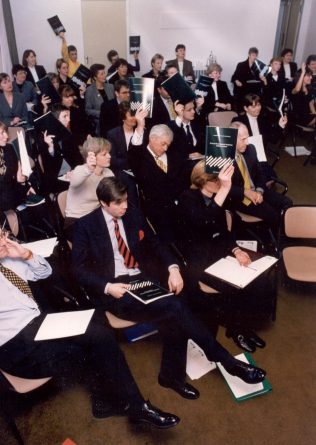 Many Partners had their first introduction to Odney when they spent time on a course or conference held at the Management Training Centre.

The Partnership’s Central Training Department used to be based in old buildings in John Prince’s Street (near Oxford St), but in the early 1970s it was realised that there would be advantages – for both trainers and trainees – in having a purpose-built training centre in pleasant surroundings on Partnership property AND with residential accommodation nearby.

Odney seemed the ideal spot and the centre was built on the site of a walled garden which once housed the Founder’s owl aviaries!

On Monday 27 March 1972, the Partnership’s Central Training Department moved from 1-2 John Prince’s Street London to the newly completed Management Training Centre at Odney. The new building only took ten months to complete, but uncharacteristically “moving in” had to be put off until the evening as the removal van was delayed. However by the next day, everything was ship-shape for Odney Partners to be shown round during their communication half hour.

On 5th April 1972, the Selling meeting was held at the MTC, so Heads of Branches had an opportunity to inspect the new building and see the facilities it provided for management training in the business.

From Easter 1972 the number of management and merchandise courses was building up and by May the four training rooms in the Centre were in full use.

On Tuesday 16 May the centre was “at home” to all the Staff Trainers from around the business giving them the chance to see for themselves the facilities provided by the Centre.

In November 1972 Heads of Branches attended a training seminar at the MTC; at a previous Selling Meeting, after hearing about the excellent courses available for their department managers, one of them said “when are you going to do something for us?” Whether he was joking or not, Central Training seized their chance and arranged sessions including “getting the best out of people” and “how to manage time.”

The MTC grounds were redesigned in the Autumn of 2000 to make the area more inviting. The space was quite a hotspot, so large rocks and plants such as yuccas gave it a Mediterranean feel.

The MTC closed in the early 2000s and the Sir Bernard Miller Conference Centre opened in 2006.