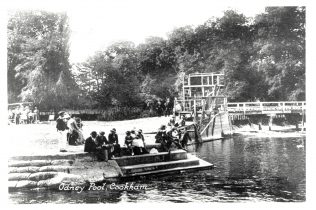 A recent visitor to the Heritage Centre was a gentleman by the name of David Thomas. Many years ago he was an associate member by dint of the fact he was a resident of Cookham.

He was a keen tennis player and got to know the club through tennis matches as well as his friendship with long serving Partner Ronnie Ryall.

He recalls the days before the swimming pool was installed in the grounds and members used to swim in the Lulle Brook.

When it was first built it had no fence around it and members could swim at any time. This was, of course, before the days of “Health and Safety!”

On a Saturday night it was often used by people in the local community who used to “break in”, by fording the stream at the dam, and hold illicit parties at the pool. David didn’t participate as he didn’t want to lose his membership! So now we know why the pool was eventually fenced in!!

David was also a keen fan of Scottish dancing and used to participate in it when in the army at Catterick Army Camp. He said this was because girls were involved!

He also did demonstrations of the art at dinners which were held at the club three or four times a year.

Before the local Scouts took over the organisation of the Bonfire Night Party it used to be held by the club at the cricket ground, organised amongst others by Ronnie Ryall. After dinner in the Manor House David used to lead a procession to the ground by playing the bag-pipes!!!

Thank you, David, for your recollections.

Does anyone else have memories of these times?